Clinical Studies on NEC and feeding intolerance with L. reuteri in preterm infants

IBT is a pharmaceutical company situated in Stockholm, Sweden, focused solely on development of medicines for premature infants. The drug candidate IBT-9414 consists of a pure live bacterial formulation of Lactobacillus reuteri that, in collaboration with the FDA and EMA, currently is undergoing risk-benefit analysis in a phase 3 clinical trial (The Connection Study). IBP-9414 has granted orphan drug designation for the prevention of necrotizing enterocolitis (NEC) by the FDA and the European Commission.

Lactobacillus reuteri (L. reuteri) is a facultative anaerobe bacterium. It belongs to the Gram-positive group of commensals, which occurs as a natural component of the human microbiota.

Animal studies substantiating the safety of L. reuteri include studies on single and multiple dose toxicology, reproductive function and genotoxicity. Genomic analysis of IBP-9414 has confirmed that it does not contain either virulence or transferable antibiotic resistance genes. Thus, transfer of antibiotic resistance from L. reuteri is therefore not a risk. Genomic analyses also suggest that survival of L. reuteri outside of the GI tract is unlikely (Frese et al, 2011).

All lactobacilli produce lactate from carbohydrate fermentation. The safety of L. reuteri in older infants (Connolly et al, 2005) has been studied and there is no clinically significant increase in urinary D-lactic acid after administration of this bacterium. Administration of L. reuteri can cause transient increases in D-lactic concentrations in 3-day old term infants but these changes are not associated with any signs of D-lactic acidosis and intake of L. reuteri containing formula is considered safe (Papagaroufalis, 2014). Metabolic acidosis related to IBP-9414 in the phase 2 Safety and Tolerability trial did not occur (Link).

L. reuteri is tolerant to the acid conditions of the stomach and is able to grow in physiologically relevant concentrations of bile (Rosander et al, 2008; Whitehead et al, 2008). Should translocation occur across the intestinal wall, no further migration beyond the mesenteric lymph nodes has been predicted (Dicksved et al, 2012). The bacterium is eliminated in the feces as part of normal mammalian body functions.

L. reuteri has been extensively studied in humans, including preterm infants in neonatal intensive care. Published data provide support for the efficacy for L. reuteri in the prevention of NEC and improved feeding tolerance of preterm infants as well as its safety when administered to preterm and term infants, children, and adults. L. reuteri has significantly increased the rate of survival and decreased the incidence and severity of NEC in animal models (Liu et al, 2012; 2013; 2014).

The excessive inflammatory response associated with abnormal intestinal microbiota is currently considered to be the most important factor in the pathogenesis of NEC (Pammi et al, 2017). The NICU is an environment where the pressure for Gram-negative bacterial colonization of the gut in infants is high, making the balance by healthy commensal Lactobacillus of potentially great importance. The objective of IBP-9414 treatment is to provide a rich source of Lactobacillus to infants in the NICU. In the first days of life of healthy, term infants, Lactobacillus colonization of the gut proceeds rapidly while this is much rarer and slower in premature infants requiring intensive care (Hall et al, 1990).

The mode of action of L. reuteri in the prevention of NEC is not fully elucidated, but there are 3 possible mechanisms thought to lie behind the effect: (1) an antipathogen effect; (2) an anti-inflammatory effect; (3) effects on gut motility and gut mucosa.

Studies evaluating fecal microbiota suggest that NEC is associated with both blooms of unusual intestinal pathogenic microbial species in the days prior to the onset of NEC, and an overall reduction in the diversity of microbiota, especially when there has been prolonged antibiotic therapy (Warner, 2016; Pammi et al, 2017).

L. reuteri is unique in that it produces a potent antibacterial compound, reuterin (Talarico et al, 1988; Morita et al, 2008). In addition, L. reuteri produces a range of other antimicrobial substances like short chain fatty acids as lactic and acetic acids, hydrogen peroxide, and bacteriocins (Fuller, 1989). The best characterized bactericidal action is linked to the aldehyde group of the reuterin molecule (Vollenweider et al, 2004; Schaefer et al, 2010). Synthesis of reuterin is stimulated by the presence of neighbouring bacteria and the antibacterial effects occur over only a very short distance with no systemic uptake (Edens et al, 1997). Reuterin inhibits the growth of species from all bacterial genera tested thus far like Escherichia, Salmonella, Shigella, Proteus, Pseudomonas, Clostridium and Staphylococcus. Also affected, but to a lesser degree, are Streptococcus, Pediococcus, Leuconostoc, and Lactobacillus (Axelsson et al, 1989; Spinler et al, 2008).

Sequencing of stool derived bacteria in neonatal models has indicated that administration of L. reuteri increases the phylogenetic diversity of the distal intestinal microbiome, which may confer resilience against pathogen-induced perturbations of commensal microbial communities (Preidis et al, 2012a, b).

In an established ex-vivo mouse model, intraluminal L. reuteri modulated jejunal and colonic motility with onset latencies of 10-20 minutes, and the effect was sustained after 20 min of washout. This suggests that the bacterium to host gut signal does not rely on colonization by the bacteria per se, but rather an intrinsic, primary afferent neuronal effect (Wu et al., 2013).

L. reuteri has been shown to dramatically increase enterocyte migration, proliferation, and crypt height in newborn mice and to reduce translocation of mucosal bacteria to the mesenteric lymph nodes (Preidis et al, 2012a; Dicksved et al, 2012).

L. reuteri has been extensively studied in humans, including preterm infants in neonatal intensive care. Published data provide support for the efficacy for L. reuteri in the prevention of NEC and its safety when administered to preterm and term infants, children, and adults.

L. reuteri was administered in published clinical trials to over

From these studies it may be concluded that doses in infants and children of 107 to 1011 CFU/day and of 106 to 1011 CFU in adults during up to 6 months have been considered medically safe and well-tolerated.

Since IBP-9414 contains pure live bacteria, knowledge on antibiotic sensitivity is important should intestinal translocation or ward contamination occur. Such complications have not been reported in published controlled NEC studies so far. The minimal inhibitory concentrations (MIC) for L. reuteri are summarized in the table below. All species of Lactobacillus, including L. reuteri, are intrinsically resistant to vancomycin and because this resistance is intrinsic, it is non-transferable.

The IBP-9414 formulation has been developed under IND (US) and EMA (Europe) control. This includes:

Marketed probiotic formulations containing bacteria to date lack standards according to the criteria above. This means there is insufficient product control regarding the number of viable cells/dose, contaminants, shelf-life of the product, appropriate storage conditions to maintain viability and labelling. Poor contaminant control poses risks to the recipient, especially vulnerable subjects such as preterm infants.

The IBP-9414 powder for oral suspension is a white to off white, lyophilized powder provided in a single-use glass vial that should be stored at -20°C ± 5°C. The product contains L. reuteri, cryoprotectants and excipients chosen with particular concern for the neonatal population. No coloring agents, flavors, or preservatives are used in the formulation. It is developed for enteral, once daily administration after reconstitution in sterile water.

Necrotizing enterocolitis (NEC) is an acquired, severe inflammatory disease of the newborn that occurs in 3-10% of infants with 500-1500 g birth weight and is the leading cause of gastrointestinal-related morbidity and mortality in neonatal intensive care. Mortality rates of 16% to 42% occur in infants with birth weights of 501- 1500g with the highest mortality in the smallest infants requiring surgery for NEC (Blakely et al, 2005; Fitzgibbons et al, 2009).

The pathogenesis of NEC is not fully understood, but is likely to be multifactorial, including genetic predisposition, intestinal immaturity (i.e., immaturity of gastrointestinal motility, digestive ability, barrier function, circulatory regulation, and immune defense), abnormal bacterial colonization of the intestine, and a highly reactive intestinal mucosa (Lin et al, 2008; Neu and Walker, 2011). The current theory is that NEC is most likely a consequence of the interplay between prematurity, enteral feeding, and aberrant bacterial colonization of the gut that triggers an exaggerated GI and systemic inflammatory response which predisposes the infant to intestinal injury (Neu and Walker, 2011).

NEC prevention strategies are urgently needed, particularly since there has been little progress in improving outcomes for infants once the disease has developed. Several preventive strategies have been explored, including the use of anti-cytokine agents, glucocorticoids and growth factors, early enteral feeding especially with breast milk, and administering prebiotics, probiotics, or both (Neu and Walker, 2011).

Introduction of enteral feeding is recommended ideally on day 1 after birth and subsequent advancement of feeds at 20 mL/kg each day with the goal of reaching full volume feedings at 120-150 ml/kg/day to support growth as quickly as clinically feasible. The volume of enteral feeding tolerated by the preterm infant gut is a relevant and accessible parameter that reflects gastrointestinal functions (Murgas-Torrazza, 2013).

L. reuteri modulates gut motility (Wu et al, 2013) and improves postnatal maturation of the preterm infant gut (Indrio, 2008; 2011). This is consistent with the experience from controlled clinical trials in preterm infants in which time to full enteral feeding was significantly reduced with the L. reuteri strain of IBP-9414 (see table below).

A range of published clinical studies indicate a preventive effect of L. reuteri administration on the incidence of NEC in premature infants (see Table below). Since they were not powered for detecting a clear signal on any significant preventive effect, nor conducted under FDA or EMA regulations for clinical registration trials, all of them can be used only as support for the initiation of a complete program for the registration of a new medicine.

Taken together, however, they provide strong encouragement for the pharmaceutical development program to produce and clinically verify the benefit-risk balance of IBP-9414, in order to seek Regulatory Medicines Agency approval of IBP-9414 for the prevention of NEC and improved feeding tolerance in premature infants of 500-1,500 g birth weight.

Clinical Studies on NEC and feeding intolerance with L. reuteri in preterm infants 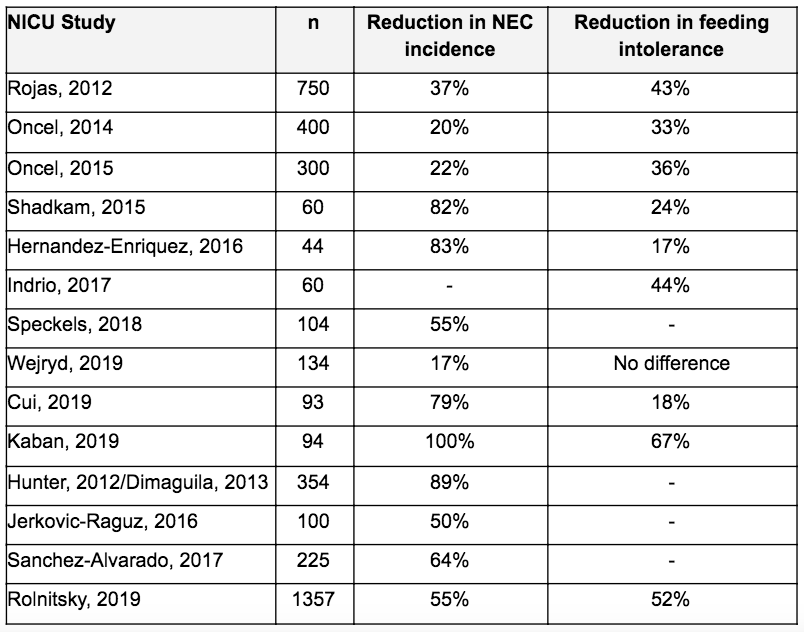 As part of the clinical development program for IBP-9414 for the prevention of NEC and improved feeding tolerance of premature infants, an investigation of the safety and tolerability of IBP-9414 premature infants was performed in the study “A randomized, double blind, parallel-group, dose escalation placebo-controlled multicenter study to investigate the safety and tolerability of IBP-9414 administered in preterm infants” (ClinicalTrials.gov identifier: NCT02472769). From this study it can be concluded that IBP-9414 is suitable for use in preterm infants at risk of developing NEC. The study provides the clinical experience for the continued development of IBP-9414 for the prevention of NEC.

IBP-9414 or placebo was administered once daily for a period of 14 days. Follow-up assessments were made up to 6 months after the last dose. The Primary Outcome of the trial was safety and tolerability as the observed number of adverse events (AEs) and serious AEs (SAEs).

After presentation of this data and discussion with the relevant Health Authorities progress of the pre-agreed Clinical Development plan was authorized, whereby the large scale phase 3 study “The Connection Study” was initiated.

The primary goal of this study is to explore safety and efficacy of IBP-9414 on the prevention of NEC and on improved enteral feeding tolerance in premature infants with a birth weight of 500-1,500 g. Details of this study can be reviewed at ClinicalTrials.gov (Identifier: NCT03978000) and here.

Today many premature infants receive insufficiently characterized probiotic formulations that are marketed as food supplements. Such preparations have not undergone the rigorous approval of any regulatory medicines agency, regarding their production, actual bacterial content and contamination levels, packaging, distribution, stability, dose security as well as clinical effects and potential medical risks associated with the administration to especially vulnerable premature infants.

In fact, the FDA has expressed its concern for reported serious side effects and risks on the use of these non-approved probiotics in preterm infants (Link).

This site uses cookies – small text-based files that are placed on your device to help us provide a better user experience. Find out more.